The need for cybersecurity in the age of unified communications 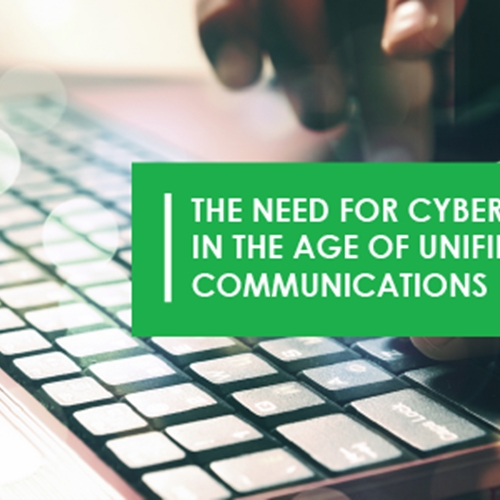 As unified communications becomes more popular, companies will need to take precaution to defend it from cyberattacks.

Technological innovation has provided many companies with the tools they need to reach the next echelon of successful companies.

Along the way though, it has opened the door of some organisations to cyberattacks. Ransomware is a well-known term in every IT department across the world and rightfully so - experts predict attacks will double in volume in 2017 after already hitting $1 billion in value in 2016, according to InvenioIT.

Unified communications has transformed the way many business' employees interact with co-workers and customers, but the platform can leave the enterprise at risk if precautions aren't taken to improve cybersecurity.

Ransomware attacks are expected to double in 2017.

Ransomware and phishing schemes are becoming a popular tool of choice for criminals given the amount that organisations rely on the internet in this day and age. It shouldn't come as a surprise that 59 per cent of ransomware attacks were delivered through email in 2016, according to a study by Osterman Research.

Unified communications in particular could become a popular target over the next few years for a couple of reasons. While its true value is derived from moving previously siloed applications like instant messaging, email and phone calls to one platform, the inherent danger is that it's all IP-based. It's effectively a wide open door in and out of the company's network.

Given that it's a new platform for many businesses, it's likely that their IT departments haven't had enough time to take a close look at what cybersecurity measures need to be in place, which can leave the entire network vulnerable.

What to watch for

Unified communications has the power to improve productivity across an organisation by connecting users through one platform, but it's essential that companies develop an IT taskforce to prevent the most common attacks: Denial of service, toll fraud and exfiltration, according to CSOOnline.

Hackers are becoming more advanced by the second; just because your IT department has a cybersecurity strategy in place doesn't necessarily mean it's impenetrable. Be sure to regularly backup all of the company's information so that, in the scenario your business does succumb to a cyberattack, IT can isolate the issue, reset the network and avoid having to pay for decryption keys without losing all your information.

With great power comes responsibility. Cybercriminals are constantly finding new endpoints to infiltrate a business, and with the well-deserved popularity unified communications has earned will ultimately come prying eyes. Contact a Fonality representative today to learn more about how to unify your business phone systems safely and securely.